Why Should You Play Lacrosse? 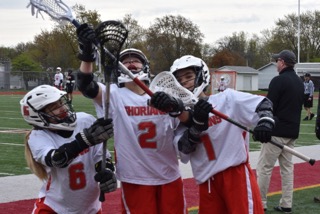 As Lake Shore’s lacrosse team is entering their second season, they look to expand and have a middle school team. After their 0-16 inaugural season, many people would say, “Why should I play?” The answer is very clear: you make new friends, learn a new sport, and have fun!

While Lake Shore’s first season didn’t go as planned, some players on the team last year were excited to start a new sport for the school. Senior Sam Talanges, was one of only four girls to play last year and wants to inspire other girls to try out the sport. She explained, “I think it’s important that more people play this season so that the game can keep growing not only at Lake Shore but within our city as well. Also more female representation so we can have a girls team next year.”

As lacrosse might look difficult for some, sophomore Andrew Sweeney, believes that it doesn’t matter who you are. While everyone on the team last year never played lacrosse, he believes you don’t have to be super athletic to play. He said, “Lacrosse is a high speed high intensity sport, but there is a position for everyone to play.”

The Shorians don’t want to be taken lightly for being a new team. They practice hard with a great coach, John Fowler. Senior Ian Calandrino, believes that Coach Fowler is the perfect fit for Lake Shore. He states, “Coach Fowler’s experiences of starting lacrosse teams around the state and his many years of coaching have helped our team. He has had to teach all of our players how to play the game, and his experiences definitely helped start the careers of all our lacrosse players.”

If you don’t play a Spring sport, lacrosse can be the thing for you. Sophomore Nate Dreisbach, says it gives him a good feeling when he plays and wants to sharpen his skills for this season. Dreisbach said, “Kids should at least try out lacrosse because it’s more fun than people give it credit for, and kids who don’t play it are definitely missing out.”

Information on finding out about the team is easy, just ask any of the kids or the coach. While the season might have already started, they are always looking for more players. With practices at 5:30pm you could even play other sports (cough, track, cough).

Come out and give it a try. You might end up liking the game. We wish the lacrosse team good luck on their upcoming season and hope to see more students joining the sport.