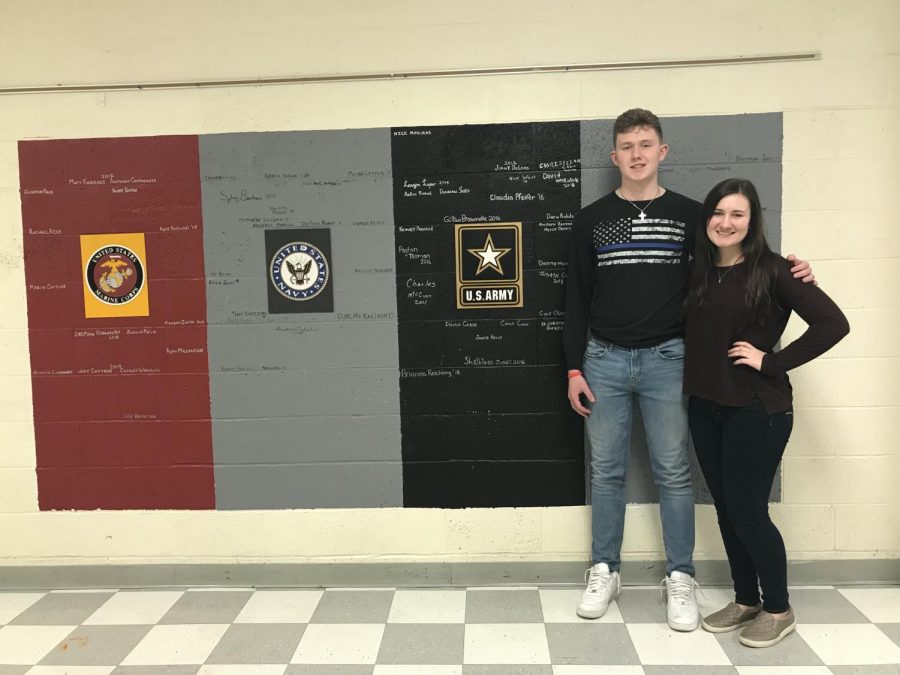 Brendan and Courtney Colley stand near the Enlistment Wall at Lake Shore.

The United States Military brands itself on being a family. They even call themselves “brothers and sisters in arms.” This saying is even more true for Senior, Courtney Colley, and Junior, Brendan Colley a sister and brother pair that have both enlisted into the U.S Military. They will both be serving in the Army National Guard.

C. Colley is set to leave for her Basic Training July, 27th 2020 roughly two months after she graduates from Lake Shore. She said, “For my basic training I will be going to Fort Leonard Wood, Missouri, and for my advanced individual training directly after, I will be at the same place.”

Since B. Colley still has another year of high school he does not go to Basic Training at the same time as his sister, but he will still be cheering her on from back in St. Clair Shores. Despite having another year of High School left, he already has figured out what his job will be in the Army National Guard. B. Colley shares, “I am enlisting as an infantryman, also known as 11 Bravo. Infantrymen are the men on the frontlines during combat.” This job is one that requires much courage and support, the latter being from sister C.Colley, their family as a whole, his found military family and the Lake Shore community.

C. Colley has her job decided as well, “My MOS (military occupational specialty) is called an 88M (eighty-eight Mike) which is a Motor Transport Specialist. My main tasks are to operate the vehicles and equipment, transport cargo and personnel, and many other things related to the job.” Her job is one of reliability and courage. Just like her brother, she will have the support of her family, her literal brother in arms, her military family and the Lake Shore community.

Having support is one of the most important things in a person’s life, no matter what one’s career path may be. It is even more important for those who serve to protect our freedom. Leaving civilian life behind is a large number of life changes all at once and can seem overwhelming, but for the Colley siblings, it has become a little less overwhelming knowing they are both serving their country side by side. C. Colley shares, “I feel really proud and excited to have my little brother serve with me. He is very dedicated and very determined so I think he will do very well in the service.”

The pride they have for one another is a nice sentiment. The Colley family as a whole share this sentiment of pride and why would they not?

B. Colley says, “My family is proud and knows that it is the right path for both of us.” Their confidence and pride in each other is not an entity they just picked up but rather instilled in them from their family’s actions of uplifting one another.

Knowing C. Colley and B. Colley will be serving the United States is a sense of pride in the Lake Shore community. They are pivotal examples of what a Shorian is supposed to be. Their family has every reason to be as proud as they are of both of them. The Lake Shore community wishes them nothing but the best in their future endeavors. Go Army!